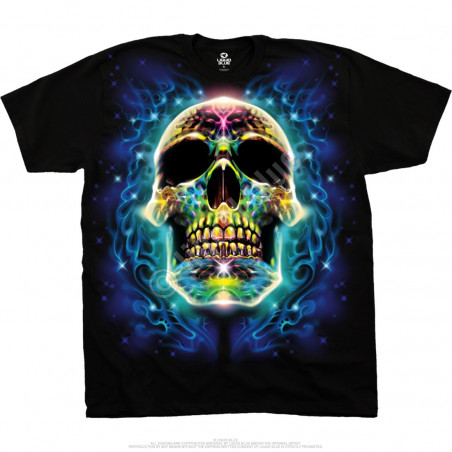 Ever wonder where the fascination with skulls began? As old as blood perhaps, mankind has held this imagery close to our collective conscience. The Sugar Skull Black T-Shirt Liquid Blue, stick around, poke around. 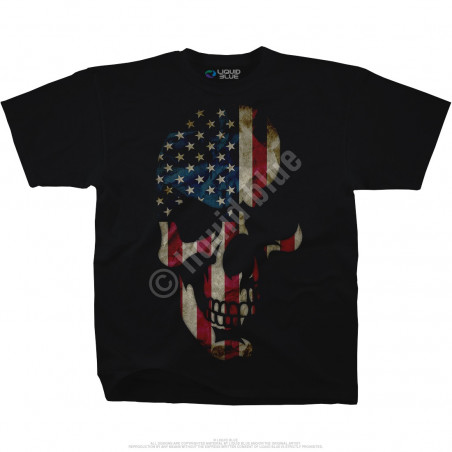 A U.S. classic, the American Skull Black T-Shirt Liquid Blue. It's actually always been a hot item and Liquid Blue is your sole provider of dark and light fantasy gear that will blow your mind and leave your wallet untouched. Best prices in the business, guaranteed. 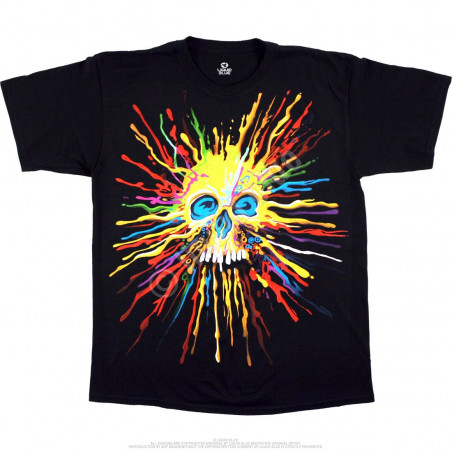 A neon wonderland, what did we do pre-neon? The Neon Skull Black T-Shirt Liquid Blue, such an awesome concept, neon takes you places that normal colors can't. And the best thing about neon, it's a sure-fire conversation starter. Like a Golden Retriever puppy, everyone loves it. 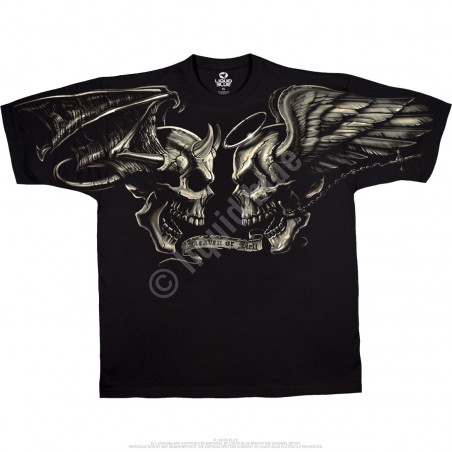 Good vs. Evil or Good and Evil, why can't it be the latter? The Skulls Good And Evil Black T-Shirt Liquid Blue, we're all human right, this is American apparel that celebrates the two, part of us, part of you. 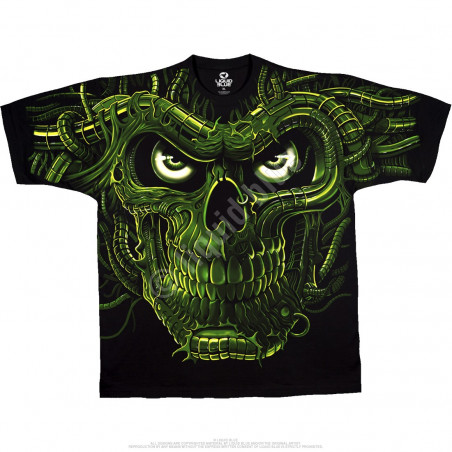 The Terminator Skull Black T-Shirt Liquid Blue "terminator" series is fantasy at its core. We've personally seen some good variations on this t-shirt, but nothing close to the design you have here. We're biased of course, but the details on this bad-boy are off the chain. Impressive work. 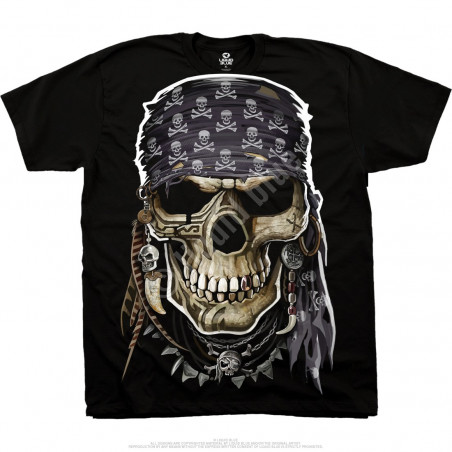 Now you've arrived at the Big Poppa, the Pirate Skull Black T-Shirt Liquid Blue. The pirate skull is "the" skull, period. If you're seeking a skull t-shirt with some light fantasy mixed in, this is where it's at. 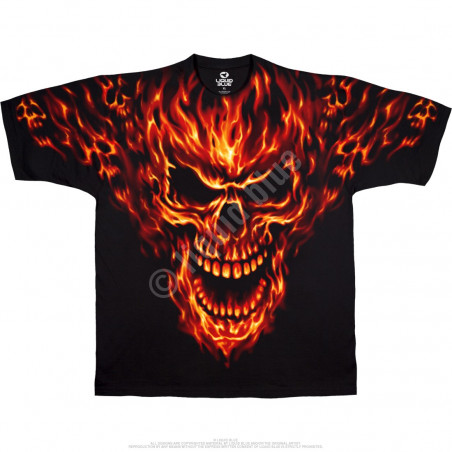 Hell upon us, the apocalypse, and a perfect complement is the raging inferno. Infernos don't just bubble, they rage, with a passion. Liquid Blue is your raging inferno one-stop-shop, tap in with the Skulls Raging Inferno Black T-Shirt Liquid Blue. 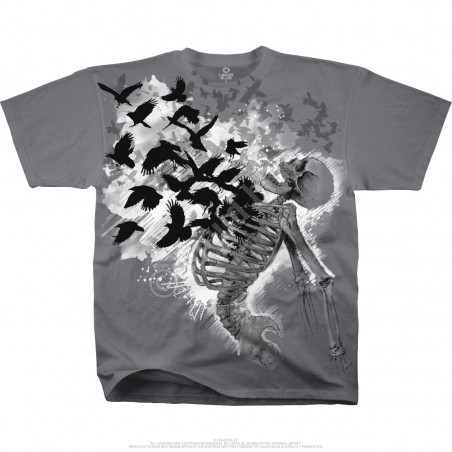 This is a light fantasy staple, it doesn't get any more breezy than this item. The Skulls Flying the Coop Grey Athletic T-Shirt Liquid Blue, this is a hot seller as folks love these t-shirts for gifts, especially around the holiday time. 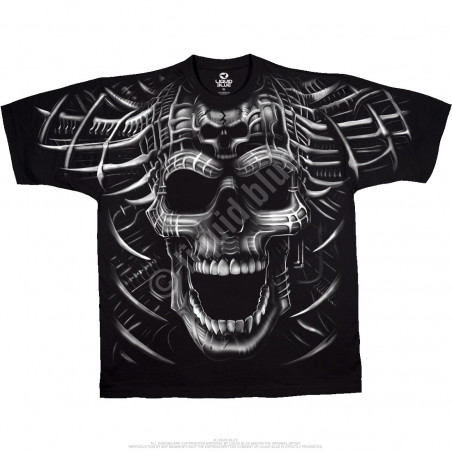 The psycho skull series is a hot seller. This design, the Psycho Skull Black T-Shirt Liquid Blue, has evolved over time and Liquid Blue is proud to feature such cutting edge artistic work on all our t-shirts. You can't have psycho without skulls, or vice-versa. 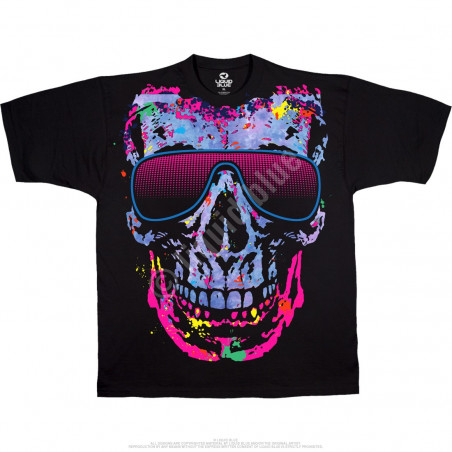 This is a shady character, for sure, but he won't bite, clothingmonster.com promises. Skulls Shady Character Black Athletic T-Shirt Liquid Blue, be different, be unique. 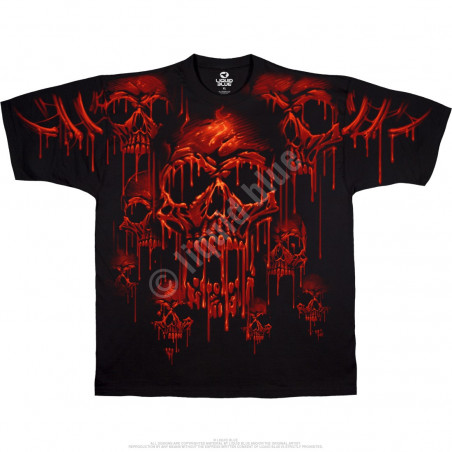 Acid rain was one of those things your parents scared you with growing up. The earth was going to end and acid rain would fall down on us all. Hasn't happened to us yet, probably not you either as you're reading this. Cool design though - the Skulls Acid Rain Black T-Shirt Liquid Blue. 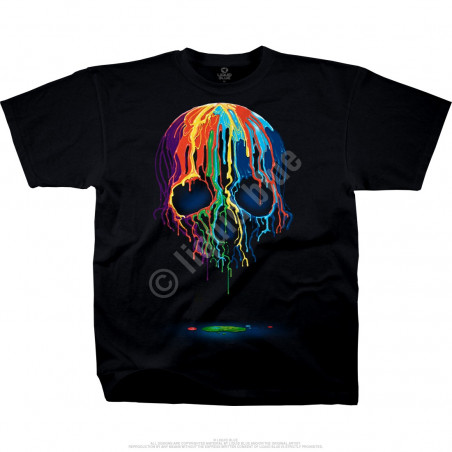 Ever seen a melting witch? Halloween stores are full of them. But Liquid Blue is the only outlet with melting skulls, the only one! You're here because our catalogue is massive, this one is a winner right here - the Melting Skull Black Athletic T-Shirt Liquid Blue.

Skulls, skulls and more skulls. Initially staff thought the Dead were going to add yet another set of skull designs to their never-ending catalogue. Not that we would mind, anything Grateful Dead is welcome around the clothingmonster.com offices. If Jerry and Phil approve, then who are we to say otherwise, right?

But this isn’t Dead gear, in fact, far from it. These fantasy skull designs, dare we say, are at another level. If Jerry was alive today he actually might navigate over here to buy rather than from his own band! Ok, maybe that’s going a little too far, but you get the picture. These skulls are straight up intimidating, but not in the “I´m going to kick the bleep out of you” intimidating. Rather, this is art, and this art is heavy, so take notice because they truly are one of a kind.

The clothingmonster.com fantasy skulls catalogue is extensive and will blow your mind. Stay awhile, you won’t regret it.